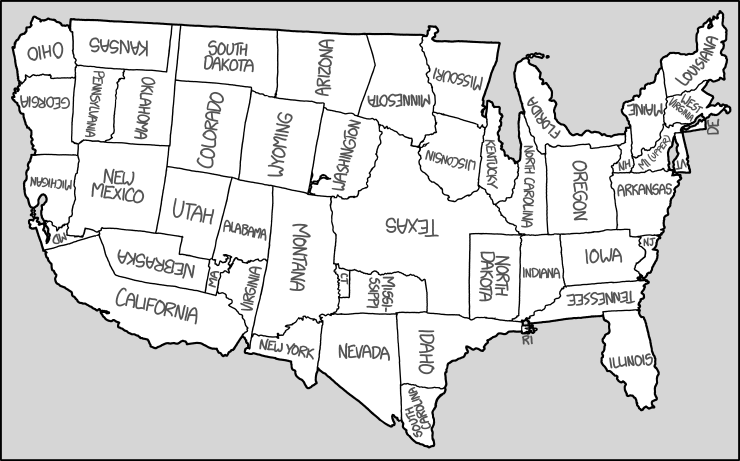 jonathanpeterson
reply
Just went and moved the cajuns back to where there were before.

pavel_lishin
reply
I wonder how many possible rearrangements there are that still result in a vaguely US-ian map.
New York, NY

There's a joke here? Or a point, at least?
FourSquare, qv

kazriko
Not that I can see, aside from making it roughly the same shape with all the pieces moved around.

ktgeek
reply
Well, a lot of Illinois people return and move to Florida, so this tracks.
Bartlett, IL

Man this is weird
clmbs.oh

alt_text_bot
reply
It would be pretty unfair to give to someone a blank version of this map as a 'how many states can you name?' quiz. (If you include Alaska and Hawaii, you should swap the Aleutian Islands with the Hawaiian ones.)

25. Verschlimmbessern (German): To accidentally make something worse in the process of attempting to mend or improve it. Multiple applications around computers, cake baking and relationships.

jonathanpeterson
reply
This should probably be a brand of sheetrock mud sold to home owners.

I was just wondering if there was a word for this re relationships.
California 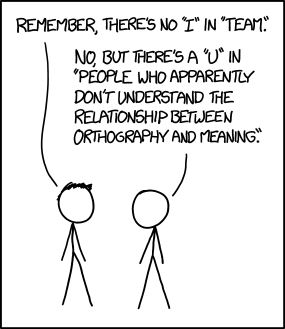 silberbaer
reply
...and there is no F in way.
New Baltimore, MI

There's no A in Fonzie

There is no Y in SCIENCE
Earth, Sol system, Western spiral arm

treedweller
There is "M" and "E" though

U.S. officials loyal to President Obama began the week by denying that he knew about NSA spying on German Chancellor Angela Merkel and leaders of other allied countries. Now other current and former intelligence officials say the White House knew all along—and they appear to have implicated Hillary Clinton in approving the high-stakes spying.

The Los Angeles Times has the scoop:

The White House and State Department signed off on surveillance targeting phone conversations of friendly foreign leaders, current and former U.S. intelligence officials said Monday, pushing back against assertions that President Obama and his aides were unaware of the high-level eavesdropping.

Professional staff members at the National Security Agency and other U.S. intelligence agencies are angry, these officials say, believing the president has cast them adrift as he tries to distance himself from the disclosures by former NSA contractor Edward Snowden that have strained ties with close allies.

Did Obama know himself? The article stops short of saying so, but describes the information flow between the NSA and the White House in these

a foreign leader is targeted for eavesdropping, the relevant U.S. ambassador and the National Security Council staffer at the White House who deals with the country are given regular reports, said two former senior intelligence officials, who spoke on condition of anonymity in discussing classified information. Obama may not have been specifically briefed on NSA operations targeting a foreign leader's cellphone or email communications, one of the officials said. "But certainly the National Security Council and senior people across the intelligence community knew exactly what was going on, and to suggest otherwise is ridiculous."

So what do we make of this? Here's what we know for sure: There are some U.S. officials in Washington leaking Team Obama's narrative to journalists, and other current and former U.S. officials leaking the surveillance state's narrative. As much as Team Obama has done to empower Team Surveillance, they have distinct interests. Both have proved willing to lie to advance their interests. And whether Obama knew or not, these leaks are going to make it extremely difficult for him to have plausible deniability when he speaks with allied leaders (though Marcy Wheeler finds it plausible that Obama really didn't know).

That's just the beginning of the bad news for Obama—there's just no way he comes out of this with his reputation intact. Either he knew about the spying and is lying to us, raising the question of how truthful he's been in his other statements about surveillance, or else he was ignorant of spying that he really ought to have known about. Recall Obama's assurances that NSA activities shouldn't worry Americans, due to allegedly stringent oversight from Congress and allegedly intense monitoring and checks within the executive branch. Yet here is a major program of consequence, and both Obama and the head of the Senate Intelligence Committee, Senator Dianne Feinstein, claim total ignorance! What's more, when it's discovered they say it really shouldn't have happened. What else is the NSA doing that they wouldn't defend if they knew about it?

The irony is that insofar as U.S. surveillance officials succeed in making Obama look like a lying hypocrite, they undermine trust in the surveillance state that he ultimately runs.

Indeed, the legitimacy of the surveillance state is unraveling before our eyes. As yet, it's impossible to know for sure who is lying about what, which claims are true and which are false. But Edward Snowden's revelations and the reaction to them has opened a public rift between the spies and the civilians in charge of them; exposed U.S. officials with conflicting stories; prompted White House narratives in conflict with one another; and bemused a Senate Intelligence Committee leader. And that's just the fallout from a narrow controversy about spying on world leaders.

The impression is of a surveillance state that's out of control.

Spying on tens of millions of Americans and hundreds of millions of innocent foreigners is far more objectionable than NSA spying on 35 world leaders. But if the surveillance state is finally taken down a peg by an angry Angela Merkel and some senators who only seem to get upset at spying on other governing elites, so be it.

jonathanpeterson
reply
"The impression is of a surveillance state that's out of control."

Is there ANYONE on the planet who DOESN'T have that impression since the Snowden leaks started?

gmuslera
reply
Remember, James Clapper was found lying to the very Congress regarding NSA, and even was promoted for that. If they don't care about lying to the congress or its consequences, why should tell the truth to others?
montevideo, uy 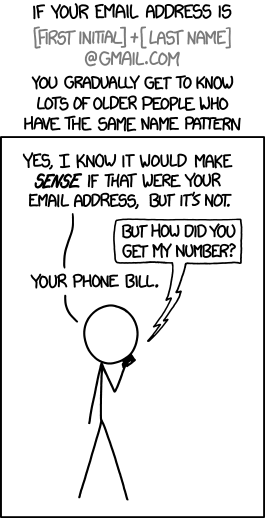 Happens all the time. It's interesting what you can piece together of peoples' lives from mistaken emails.
NYC

Skotte
reply
My email address has "Cheeze" with a Z instead of an S. I imagine the owner of the "Cheese" address gets a lot of my mail fFrom fFamily who don't notice the Z.
Rochester, Earth

therealedwin
reply
This happens to me all the time with my gmail.
Seattle, Washington

cbenard
reply
Happens all the damn time to me.
Plano, Texas

reply
Looking at you, Ken and Katie...
Atlanta

MEVincent
reply
I've even got a number in mine and have still collected a guy in FL and a guy outside London.
Manassas, Virginia

hansolosays
reply
I got an excellent pancake recipe this way...
Norfolk, Virginia

jeffjacobs
Apparently someone who doesn't know their email address is getting their house remodeled. Lots of appointments for new bath fixtures and curtains

sleepwalker
I received mystery college acceptance letters. Eventually Samuel caught on and sent me a message himself asking about it. Also. er,would you be willing to share the recipe?

hansolosays
here ya go.... Okay, Chuck. Here it is. Prepare to become a legend. The trick is to blend the dry ingredients thoroughly and beat the wet ingrediients together separately.. Then CARESS the wet ingredients into the dry. Don't overmix them because it will make them tough. Preheat griddle to 375. Mix together. 2 Cups Flour 1 tsp soda 1 tsp salt 4 Tbsp sugar In another bowl beat together 2 cups Buttermilk 2 Tbsp oil 2 eggs 1 tsp vanilla Gently mix wet and dry ingredients together. Grease griddle -- Make smaller pancakes 1\4 to 1/2 cup batter. Turn when bubbles pop and do not close. (Hint: You may want to slightly increase the amount of sugar and vanilla according to your taste.) Once you master this recipe, people will beg you to make your pancakes at family get togethers. It really spoils them. Thanks again for a great time. It was so good to see you again.

zippy72
reply
My namesake is the British ambassador to Iraq. If this happens, it could be interesting...
FourSquare, qv

pberry
reply
This is my inbox.
Chico, CA

ktgeek
reply
I have this happen constantly. Makes me sad that I got in on gmail so damn early. Just means a lot of "spam" gets bit bucketed.
Bartlett, IL

I actually keep a file with all the people whose e-mail I get and their actual e-mails. I know which e-mails to forward to Pennsylvania and which to Texas...
Nilbog

wmorrell
reply
ALL. THE. TIME. There are at least four distinct individuals who at one point or another believed they owned my email address.

this is why I have my own domain name. Never happens.
Uranus

WebWrangler
Yep. Had my own domain for 14 years now. Never happens to me either

vincemulhollon
Yeah, whatever, said John Smith. For me not so much of a problem.

superiphi
you are never safe! I have iphi.ne/com/org -get tons of emails meant for Lphi.

My problem is younger people with my name.
United States

My favorite are the photos of bass that some guy caught and tried to send to his brother. I may not have any brothers but I do know a nice looking bass when I see one.
Blur Area

zwol
reply
This T-shirt will only get more common as time goes on.
Pittsburgh, PA

firstname.lastname here. That limits how much I get. The good news is that the Wharton School is convinced that I'm an MBA alumni. I'm sorely tempted to order a "replacement" MBA diploma.

rjstegbauer
I can still get first.last@anywhere.com for probably forever. I have an uncommon lastname and now uncommon first name.

toxotes
reply
Somebody with my last name and a *different* first initial signed up for phone service with my email address last week.

dianaschnuth
reply
Or if your email is [last name] + @gmail.com...
Toledo OH

This happens to me All. The. Time. So far I've collected a professor in Arkansas and someone who works at the CDC in Atlanta and a Tea Partier. It's BIZARRE.
Northern Virginia

sleepwalker
Your inbox sounds like a very strange place. Not sure I'd want to visit, much less live there.

NielsRak
reply
Don't know what you're talking about... :)

oliverzip
reply
The worst being this who sign up to xbox live and can use unvalidated email addresses and then are reduced to begging you to have their account back.
Sydney, Balmain, Hornsby.

I have actually gotten job offers (plural), presumably intended for whatever evil doppelganger of mine doesn't know his email address.

nderksen
Same here. I politely emailed them back advising them to phone the candidate instead. Also had an issue with someone setting their alternate email for their Yahoo account to mine, then they guy kept on emailing support asking why they weren't getting a response. Tried to get Yahoo support to understand but because I didn't have the responses to their security questions they ignored me. So annoying.

Alt text: I asked a few friends whether they'd had this happen, then looked up the popularity of their initials/names over time. Based on those numbers, it looks like there must be at least 750,000 people in the US alone who think "Sure, that's probably my email address" on a regular basis.
Oakland, CA

MaryEllenCG
GAH. YES. And mine's not even (first initial)(last name).

THIS. ALL THE TIME THIS.
Wakefield, MA

Lythimus
I still can't believe it's good that I was too young and stupid to get my name for a gmail address when it was in invitation-only mode.

ScottInPDX
reply
Or just the last name. I get tons of mail not for me.
Portland, Oregon, USA, Earth

kipthegreat
or [firstname].[lastname]. i have a very uncommon first name (Kip) but i get mail for a mormon firefighter in california and a boy scout leader in arkansas and a heating&air guy in arizona. but surprisingly i've never gotten mail intended for my dad, who has the same name as me

lrwrp
reply
Experience dis all the time.
??, NC
Next Page of Stories